The largest Children's Festival in the United States is scheduled for
April 4 & 5, 2020.

The McDonald’s Houston Children’s Festival is the largest children’s festival in the United States and will be celebrating its 32nd year in 2020. The Festival has raised over $5.6 million during the past 31 years for Child Advocates, and has entertained over one million attendees over that time. This year's festival excitement features 14 Big Family Adventure Zones, five stages of music and entertainment, over three hundred fun activities plus featured celebrities and characters.
Where
Downtown Houston, starting at the corner of Bagby and McKinney streets, moving west to include historic Sam Houston Park as well as all the beautiful greenspace just west of Sabine Street
Date
Saturday, April 4, 2020 and Sunday, April 5, 2020
Time
10:30 AM until 6:30 PM
Learn more at www.houstonchildrensfestival.com 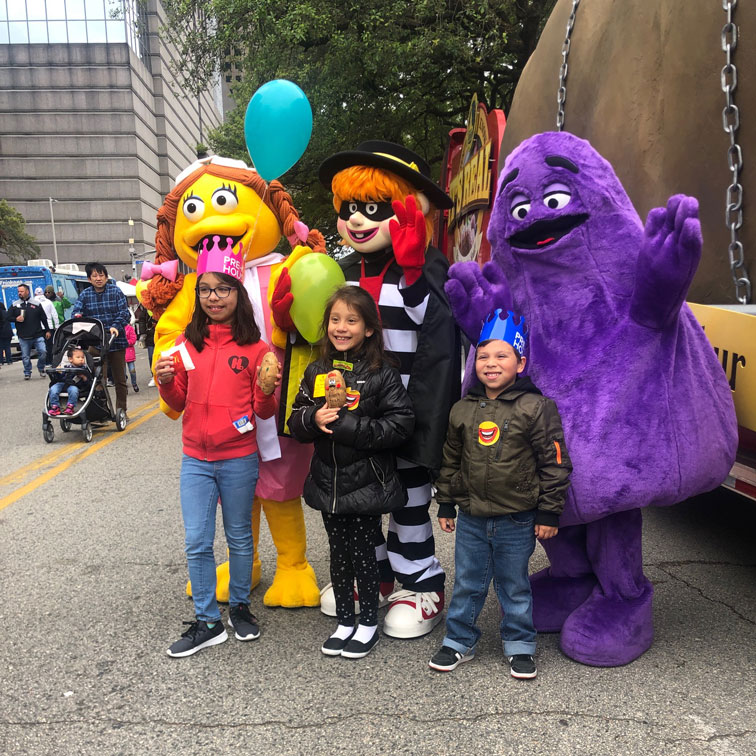 About the McDonald’s Houston Children’s Festival
The McDonald’s Houston Children’s Festival was selected as “one of the world’s 300 unmissable events” by Frommer’s Travel Guides. Celebrating its 32nd year in 2020, it is one of Houston’s signature events and is an excellent fundraiser and community awareness event for Child Advocates. With a projected annual attendance of over 50,000 people, the festival celebrates three decades of proven success for sponsors, the community, participants and most importantly, for Child Advocates and the abused and neglected children it serves.
The Houston Children’s Festival was born in 1988 and was originally known as the “Children for Children Festival.” Attracting a crowd of less than 5,000 people the first year, the goal was to create a family festival that would serve as the vehicle to educate the public about child abuse and the mission of Child Advocates. For the first few years, the festival was located across from the George R. Brown Convention Center, where Discovery Green Park is now located. When the festival continued to grow and needed a bigger home, it was moved to the Greenway Plaza area and occupied two large, then-vacant lots next to what is now Lakewood Church. After a two-year stint at Hermann Park, the festival found its current home in downtown Houston in 1999. It was during this time that Mayor Bob Lanier saw the exceptional value in this event and designated it “The Mayor’s Official Family Celebration.”
Fundraisers Press Releases
Latest Post
Honoring Our 2022 JAG Award Recipient!
Honoring our 2022 Rookie of the Year
A Whimsical Afternoon at the Westin Galleria Raising Money for Child Advocates
return to the blog
ON INSTAGRAM @CHILD ADVOCATES
REQUEST A COURT APPOINTED ADVOCATE
You may put in a request of a court appointed advocate for any child/children currently in the temporary managing conservatorship of Harris County DFPS.