Introducing our James A. Gwinn Volunteer of the Year and our Rookie of the Year!

Every fall, we invite our court appointed advocates, board and advisory board members and our staff to gather together to celebrate the work of our incredible volunteers. It’s one evening each year when we are able to express our gratitude for their dedication to speaking up for the best interests of Houston’s abused children. 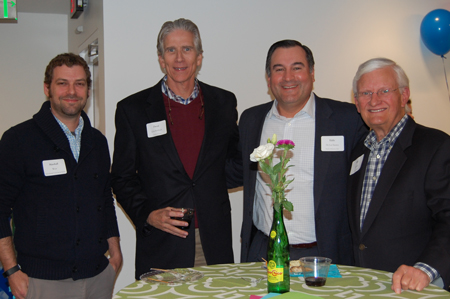 This year, we gathered in our office for drinks, hors d’ouvres and a chance for our advocates to get to know each other a little better. To culminate the evening, we heard from our board chair Eddy De Los Santos, as well as retiring family court Judge Judy Warne. Judge Warne thanked each of our volunteers along with their families for the work that they do, emphasizing the necessity of having advocates to speak up for children in the foster care system. She described our volunteers as the second responders—those who may not be first on the scene, but who will take the necessary next steps to make sure that a traumatized child makes it somewhere safe. We are so grateful for the wonderful compassion that Judge Warne has shown to our

volunteers and families and thank her for her 13 years of service in Houston’s courts.

Our favorite part of the evening, though, was having the opportunity to announce this year’s Rookie of the Year and James A. Gwinn Volunteer of the Year award recipients.
The Rookie of the Year, or ‘ROY’ award is designed to recognize a court appointed advocate who is on their first or second case and has shown an exemplary dedication to Child Advocates’ mission. They are independent, take initiative and are always looking out for the best interests of the children they serve. This year’s Rookie of the Year, Kris Woods, was nominated by her advocacy coordinator, Nicholas Alvarado, because of her outstanding work on a case with three teenage boys. When their CPS caseworker was not able to visit frequently, Kris made sure that the boys saw her regularly to offer them a sense of normalcy. She would regularly drive many hours round trip to meet them and play laser tag, go bowling or get pizza. During the course of the case, the boys’ father passed away due to an drug overdose. Kris ensured that the boys were notified in a healthy way, and that proper steps were taken to allow them to grieve and heal from their father’s death. She has built a strong relationship with their relative caregivers to make sure they are doing okay in the aftermath.

Kris’s diligent work ethic and her passion for our children gives her confidence when speaking to the judge on the case, and it was evident as we presented her award to her. Kris was thrilled to have been chosen, secretly hoping that she would be chosen. “I would do this work 60 hours a week if they would let me!” said Kris. Thank you, Kris, for your amazing dedication to Houston’s abused and neglected children!

The James A. Gwinn Volunteer of the Year award, or the ‘JAG’, is named for one of our late volunteers who showed outstanding commitment to our mission. This award is Child Advocates’ most prestigious award, and is given to advocates who have shown independence, an ability to work with all parties on a case and who are instrumental in their casework. Our JAG recipients often go above and beyond to drive the mission of Child Advocates forward and this year’s recipient is no different.

Wanda Williams has been a court appointed advocate for nearly twenty years, serving a total of 27 children and logging more than 2,000 volunteer hours. Wanda is known for taking on multiple cases at once, and for often taking cases with large sibling groups. She readily offers her time to speak to groups and promote Child Advocates, and has even appeared on television interviews to further our cause. When she’s not working on her casework, you will often find her recruiting her friends and family members to become a volunteer themselves or make a donation to Child Advocates.

Wanda’s most recent case has been particularly memorable and is what prompted her nomination for the JAG award. The four children on her case are all under the age of six, have special needs and are placed in separate foster homes. They came into the care of CPS when their parents handcuffed one of the children so he would not leave the house while they used drugs. The mother went to jail and the father was deemed unfit to care for the children, and Child Advocates got involved.

Wanda quickly got to know the children, ensuring that their needs were met. She worked with CPS to begin the search throughout the state of Texas to find them a forever home. Two families came forward as potential placements, but both were denied for justifiable reasons. Shortly after, a family came forward from Florida who was interested in adopting all four children. It was unclear how they would have known about the children since there was not a nationwide search, and Wanda had an uneasy feeling about the situation. This family seemed to resemble one of the families that had been denied, but CPS moved forward with placement anyway. Wanda could not understand why, when proper protocol was not followed.

The family came to Texas, and without Child Advocates’ knowledge, were allowed unsupervised visits with the children, even though they had not been properly licensed as a foster home. Wanda did some research to follow up on her gut feeling and discovered that the family found out about the children on Facebook, and had no relation to the children. Even still, the family’s home study was approved and the children were placed there. Wanda continued to visit the children regularly and began to notice that it seemed the parents were only interested in adopting three of the four children. She felt they were singling out one of the children because of his special needs. They even changed the names of all of the other children but did not change his name. The parents falsified reports from therapists and psychiatrists about this child’s behavior, stating that he was aggressive and unsafe for the other children to be around. Wanda had never witnessed any such behaviors.

Wanda expressed her concerns at every opportunity, but she was regularly dismissed. She was not going to be silenced so easily, though. Wanda and her advocacy coordinator came up with a plan and convinced the lawyer of the children’s biological mother to call a special hearing. Wanda was able to convey her concerns to a judge, and the court heard her. A special investigator was assigned to the case, and the children were ultimately removed from the foster home. CPS was told to find a new adoptive family for the four children. Wanda helped write a profile for the children and is working diligently to help them find their forever home. 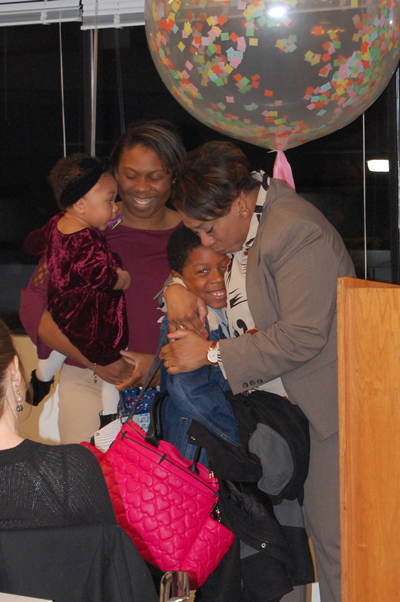 As Wanda’s advocacy coordinator and team leader, Keshawna Cole-Clark, concluded her presentation, she spoke of Wanda’s huge heart and what a joy she is to work with, saying, “not only is she an amazing advocate, but she has become a dear friend.” When Wanda realized she was our JAG recipient, her eyes filled with tears. She accepted her award in a room full of applause. She expressed her gratitude and her passion for the work that she does, thanking her fellow volunteers for their time and efforts in speaking up for Houston’s children. Congratulations Wanda on your wonderful achievements!