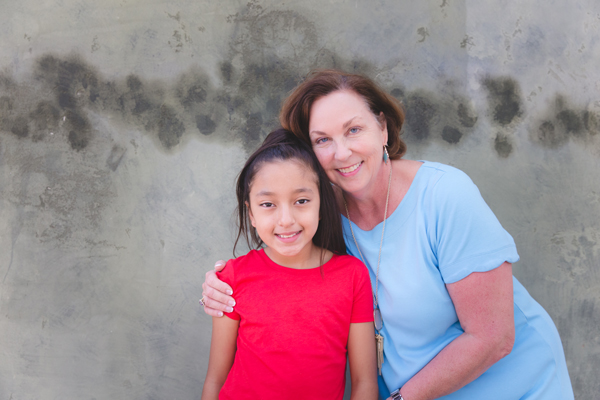 Jana Dundas had been a court appointed advocate for less than a year when she enthusiastically took her second case. It was just one month after Lorenzo*, the sixth child in the Sanchez* family, was born with drugs in his system. Because there had been numerous reports previously filed with Child Protective Services (CPS) regarding drug use from his parents, Lorenzo was removed from their care and placed with his paternal grandparents, Donna* and Miguel* Sanchez. He joined his five other siblings who were also in their care and Child Advocates was assigned to their case. Jana became the court appointed advocate for six young children, ranging in age from one month old to eight years old: Louise*, Louis*, Lindsey*, Lilah*, Leo* and Lorenzo*.

All eight members of the Sanchez family lived together in a two bedroom, one bathroom house. The eldest three children had been living with their grandparents for five years, the younger two had been there for about a year, and Lorenzo was their newest family member. Jana was intimidated by the number of children on the case, but she was eager to see how she could help.

At her first visit, Jana noticed the small size of the home, but also noticed how tight-knit and bonded the family was. All of the children were clean, well-behaved and happy. Lorenzo’s newborn needs were well taken care of, and the family dynamic was a loving one. All of the children were eager to meet Jana. She brought along a copy of Child Advocates’ book, ‘Just for Now’ and read it to the children, explaining her role as an advocate and how she would be involved in their family. She also brought gifts for the kids and everyone was excited to see what she brought.

The two oldest children, Louise and Louis, were well aware of why they were living away from their parents. “Things were really bad for the two older ones,” Jana said, recalling the initial CPS reports she had studied. “They were living in places where they didn’t have running water, the neighbors would see them walking barefoot down the street in the middle of the night with their mom and dad.” The youngest three children had never known a life outside of their grandparents’ home, so while Jana spent time getting to know each child one-on-one, she noticed that the older children needed a bit more attention.

Louise, the oldest, was the hardest for Jana to reach because she had a lot of difficulty coping with the trauma she had experienced. “My mom and dad do drugs and can’t take care of me.” Louise could explain to Jana, even at just eight years old. She cried when Jana’s first visit was over because she was afraid Jana was there to take her away from her grandparents, to whom she had become attached.

When the children were initially brought into the care of CPS, the court provided their parents with a service plan and an opportunity to regain custody of their children. Neither parent followed through. The judge had even allowed for them to have supervised visits at the grandparents’ home, but neither parent made any effort to see their children. It was clear they had very little interest in discontinuing their drug use and in parenting their children.

Jana visited the Sanchez family faithfully each month, and she never went empty handed. Before each visit, Jana would stop by the Child Advocates office and pick up diapers, wipes and other necessities from Rachel and Gilbert’s closet–a donor-supported storehouse of items for volunteers to take to the families they serve. “I used that room more on that case than all my other cases put
together,” Jana said. “From the beginning, it was about supporting the children and helping Donna.”

Through her regular visits, Jana learned that the four oldest children were sharing a room with two sets of bunk beds in their small house. Donna explained that CPS had instructed them to move the oldest boy, Louis, to a different room because he was too old to be sharing a room with his sisters. Jana worked with her advocacy coordinator, Allyson Buckner, and submitted special needs requests for a bed for Louis and dressers to hold all of the children’s clothing.

Additionally, Jana made sure the Sanchez family was aware of the many special events Child Advocates hosts for children currently in our care. Donna brought all six children to every single event that was offered, and Jana joined them. The children danced with the Chick-fil-A cows at the Holiday Party, shopped for school clothes at the Childspree and visited the Houston Zoo with Young Professionals for Children, just to name a few. Jana’s involvement on their case gave six children the chance to do things they otherwise would not have been able to do. They were given the opportunity to enjoy being children, thanks to the resources Child Advocates provided.

Throughout the year that the case was open, the parents showed little to no interest in following their court-ordered service plan. Ultimately, both parents relinquished their rights to all six children. Because Donna and Miguel were named by the court as Permanent Managing Conservators of the children, they were eligible to receive financial benefits through a Permanency Care Assistance program. However, with six children, the financial strain on their family was still significant. Jana did some research. She determined that the Sanchez family would receive greater financial assistance from the state if Donna and Miguel moved forward with adopting all six children. By adopting them, they would receive an adoption subsidy for each child until they turned 18.

The process was a complicated one, and it was overwhelming to Donna, who was also working full time and managing a large household. Jana would gather information and guide Donna through the process, often sitting with her to fill out paperwork. As the children’s advocate, Jana made sure that the move forward with adoption didn’t create a lapse in financial assistance for the family–one they truly could not afford.

When the Sanchez family had their final court hearing to establish permanent custody, the judge was hesitant about their living situation. On paper, it seemed unlikely that six children would do well in the home of an older couple with limited space and a meager income. But Jana was prepared. She had met with the children’s attorney and the CPS caseworker to share her observations with them, and they all could enthusiastically testify that the children were thriving in their grandparents’ home.

In her testimony that day in court, Jana said, “I know it doesn’t make sense that it works. I can’t explain why it works, but it is working. I’ve spent a ton of time with them and I know.” While CPS caseworkers and attorneys may have been stretched thin, Jana was able to devote the necessary time to getting to know each child, visiting the family and supporting them through a complicated child welfare process. She advocated for what was best for the children. Jana knew the family’s schedule and routine, had seen that all of their needs were being met, and she explained that the children were very bonded with each other as a result. Jana had also researched the children’s extended family, and was able to share with the judge about every aunt, uncle and cousin who formed a support system for Donna and Miguel. It was in the children’s best interest to remain together, and the judge agreed with Jana’s recommendation.

“Jana is the epitome of what a Guardian Ad Litem should be,” her advocacy coordinator, Allyson said about her. “She stepped up to advocate for the Sanchez siblings to stay together in one placement when the judge questioned the grandparents’ ability to provide for such a large sibling group. Jana was able to give first-hand knowledge of witnessing the grandparents’ excellent care for the children.”

Without Child Advocates, it’s likely that the judge would have ruled to place the Sanchez children in different homes, separated from each other. Jana’s personal, heartfelt testimony to their family dynamic, as well as her ability to support them throughout the process, allowed six siblings to remain together permanently in a safe, healthy and loving home.

Jana and Child Advocates helped provide stability for the Sanchez family, but also the chance to simply be children. They were able to have new experiences and exciting outings they wouldn’t otherwise have had. Through tangible, practical resources like diapers and furniture, Jana eased the strain on Donna and Miguel and her knowledge of how to navigate a complicated system helped set the family up for financial success as the children grew. 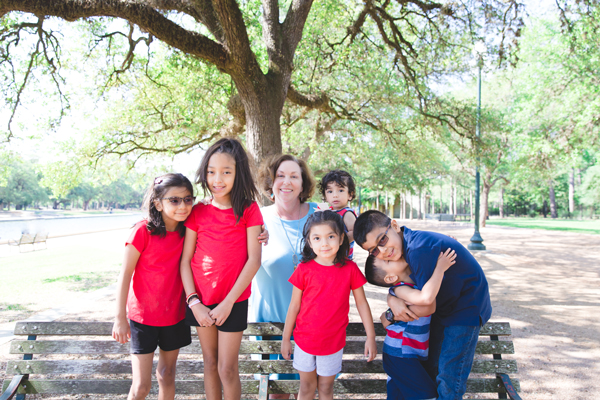 Today, Jana maintains a relationship with the Sanchez family, and they are always overjoyed to see her. The children even called to sing her happy birthday recently. It is evident that Jana’s time and effort spent getting to know them and supporting them along the way made a lasting impact for these six siblings.

This article was adapted from the 2019 Spring/Summer issue of Advocate News. To read our full newsletter, click here: childadvocates.org/blog/advocate-news-spring-summer-2019

Thank you to Hannah Deutschendorf for your wonderful photography and to the Sanchez* family for sharing your story with us.