A Sense of Security

A Sense of Security: One little boy finds a constant in the presence of his advocate 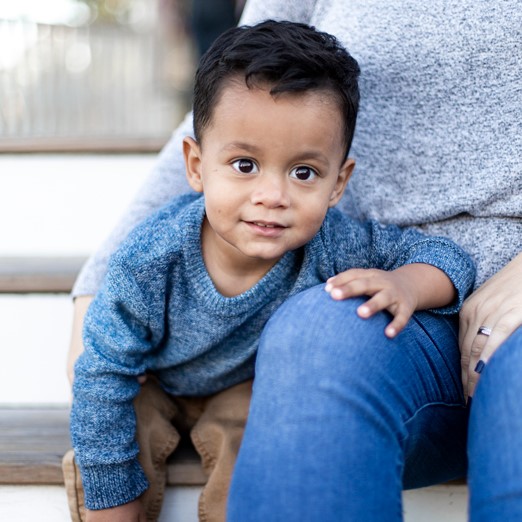 Seven-month-old Gabe came into the care of Harris County Child Protective Services (CPS) because his parents were panhandling in the scorching sun under unsafe conditions. When a very sunburned Gabe first arrived at the home of his foster parents, Neal and Bekah Springer, he was scared and malnourished.

Neal noticed almost immediately that Gabe was more comfortable with him than he was with his wife, Bekah. The two of them bonded quickly, while it took a little while longer for Gabe to be comfortable with Bekah. “He was just really scared,” Neal recalled, “As soon as he saw me, it was an instant connection with me. Knowing now where he was at the time, I think he just never knew what he was going to get from his [biological] mom.”

“We learned that Gabe’s biological mom suffered from some mental health trauma,” Bekah explained, “There was a real sense of instability. That’s part of the reason Gabe struggled to bond with me in the beginning, and all women really, and he bonded so quickly to Neal and the other men in our life.” Gabe could perceive, even at the young age of seven or eight months, that his biological mother was loving and caring sometimes, and indifferent toward him at other times. Her inconsistency caused him to keep his distance from most women.

Neal and Bekah soon noticed that Gabe was behind in his motor skills and his speech. “He wasn’t crawling, and he would sit maybe a foot away from you and cry but not know to reach his hands up or even move toward you. We could tell that he had never been on his tummy,” Bekah recalled. They had him evaluated through ECI (Early Childhood Intervention) and began therapy with him.

A couple of months into the case, Dever Lorenz became Gabe’s advocate and went to meet him for the first time. “From my first visit with him, he had my heart. He had the biggest eyes and such a sweet, calm demeanor,” Dever said. 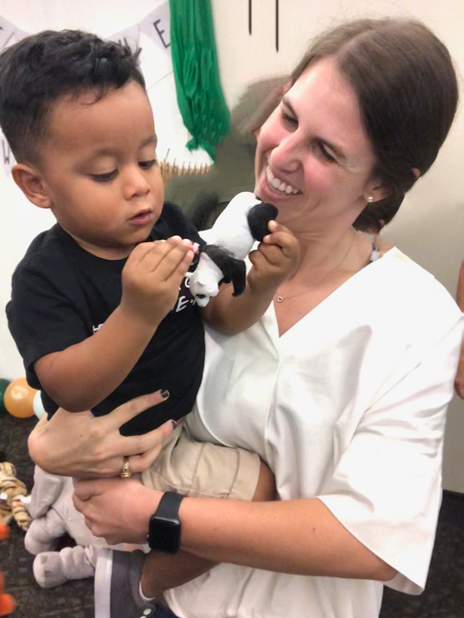 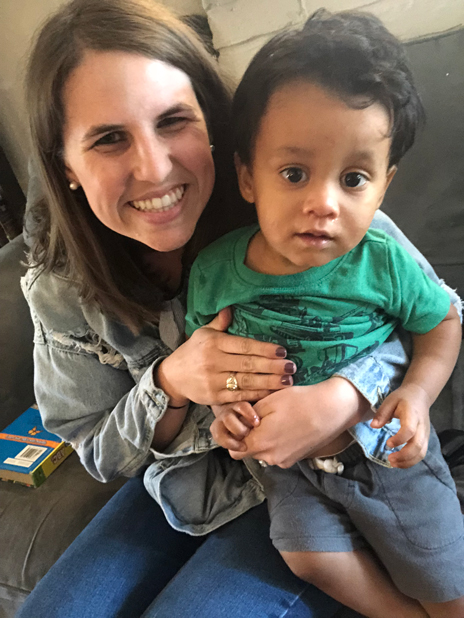 Dever quickly got to work learning about Gabe’s history and his family. Gabe’s biological parents had been living in a shelter when Gabe came into foster care, and his mom had prior history with CPS in the past. Her parental rights had been terminated for two of her other children, both of whom had been adopted. Gabe’s biological mom also had a significant history of mental illness that she was unwilling to address or acknowledge. She and Gabe’s biological dad had been homeless for quite some time. They would stay in motels as they could afford to with the money they collected from panhandling. Their life lacked stability and a consistent place to call home with a young baby boy.

Each month, Dever visited Gabe at his foster home with the Springers. When he initially went to live with them, he was reserved and could not cope well with the transitions and experiences his life held. While in the care of the Springers, Gabe began to blossom into a fun-loving toddler. Neal and Bekah saw him start to open up to Dever in particular. He became comfortable with her when he had been so closed off before. “He knew that he could be himself around her instead of having to put up that guard,” Neal said.

The court assigned Gabe’s biological parents a service plan that included parenting classes, psychological evaluations, stable housing, as well as compliance with any necessary medications. They were also allowed to have family visits to see Gabe while he was in foster care. Gabe’s biological mom came frequently, but his dad regularly missed their visits. Gabe struggled to adjust after each visit, not knowing what to expect, but Dever served as a source of comfort for him.

“There were visitations that Dever went to, and Gabe’s mood in transitioning back to our house was so much better. I think Gabe knew, not only is she safe and someone he could rely on, but he got to see her [Dever] with all these other people. I think it helped ease some of his stress,” Bekah said.

“Gabe’s biological mom came from a difficult home with CPS history and reported being abused herself. I really did feel a lot of empathy for her, but Gabe’s best interest was always my main goal.” Dever explained. She observed that Gabe’s biological parents did not seem mentally capable of caring for Gabe independently. It seemed as though his mother was more concerned with Gabe being in her care for her happiness, rather than what was best for Gabe.

At one point, Gabe’s mom moved into an apartment, where visitors violently attacked her during a party she was hosting. Afterward, she invited friends to stay with her to help her feel safe. Dever visited her home shortly after and observed that her environment and circumstances created an unsafe place for raising a baby. The apartment was unfurnished and had nothing in the way of supplies for a young child, but more importantly, Gabe’s mom was not in a healthy mental state. Dever could tell that she had not been taking her medication based on the number of pills that remained in the bottles on the counter and her inability to tell Dever who her psychiatrist was. When Dever asked her if she was taking her medication, she admitted that she was not, and continued to deny any need for help with mental illness.

Throughout the time that Dever was Gabe’s advocate, every other party involved experienced turnover. Gabe’s CPS caseworker, his ad-litem attorney and CPS’s attorney all changed within a month or two toward the end of the case when the case was nearing trial. There was even a brief period when Gabe’s case was without an assigned county attorney. It was Dever who made the necessary calls and pushed to get this resolved as quickly as possible.

Dever reassured the Springers that she was there and that she knew Gabe. She was committed to Gabe’s best interest and standing by his side through all of the change.

With all the time Dever had spent on the case, she felt confident that Gabe’s foster parents were the best possible permanent placement for Gabe. With the turnover, Dever figured out the new parties involved and got them up to speed on Gabe—all before the start of the trial.

Dever persistently contacted every single new person on Gabe’s case. She explained everything she had learned about Gabe, his family history and his current foster home. No detail was left untold. Dever even created an extensive timeline of Gabe’s life to use during the trial—it was the only clear way to share all the information she had collected. The timeline, along with Dever’s reports, was shared with the attorneys before appearing in front of the judge. This information was critical in helping all the parties make their decisions on what they should request from the judge.

“I hate thinking about what would have happened if Child Advocates had not been appointed,” said Dever. “Someone in the county attorney’s office literally told me that Gabe’s case must have ‘fallen through the cracks.’” Through it all, Dever stood by Gabe’s side as his one constant, diligently working to make sure he didn’t remain in foster care for any longer than was necessary.

On paper, it appeared Gabe’s biological mom was working a lot of her services. Dever was the only one who had visited her home and tracked down the full story, verifying her lack of safe housing and compliance with her medication.

Without a complete view of the case, it would have been challenging for the judge to make an informed decision. Only Dever and Child Advocates could provide all the details. Dever’s organized, factual and comprehensive presentation of the case was crucial. Through it all, her only focus was on Gabe’s best interest and that allowed her to be the unbiased voice of reason.

Just before the trial began, Gabe’s mom relinquished her parental rights. Gabe’s father’s rights were terminated due to his lack of completed court services. When they appeared before the judge, Dever, the attorneys and the CPS caseworker were all able to present a unified case for Gabe, thanks to the information Dever gathered and the relationships she built. 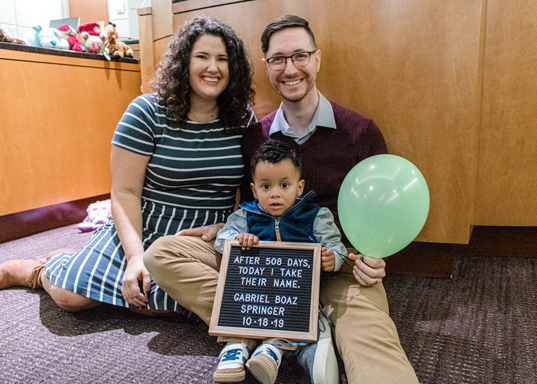 This past October, Gabe was adopted by the Springers, and Dever was there to celebrate with his family. Neal and Bekah were grateful to have her there, and Gabe was as excited as ever to see her. Bekah noted, "Their relationship is not done just because we are out of the foster care system. I think that it’s important that Gabe gets to have that relationship."

Today, Gabe continues to thrive in his forever home. He is a happy, bubbly toddler who is excelling in his speech and developing beautifully. Most importantly, he is safe and secure, with his forever parents who love him and are looking out for him, always.

Thank you so much to the Springer family for sharing your story. We are so grateful Gabe found a forever home with such a wonderful family. A special thank you to Bailey Orr Photography for the beautiful photos of Gabe.