Philip* was just eight years old when he and his siblings entered foster care. Their biological parents struggled with substance abuse and would sell their food stamps to buy drugs. Philip and his siblings were sent door to door to beg for food. If they returned empty-handed, they were beaten. Child Protective Services took custody of the children, and ultimately their parents’ rights were terminated. 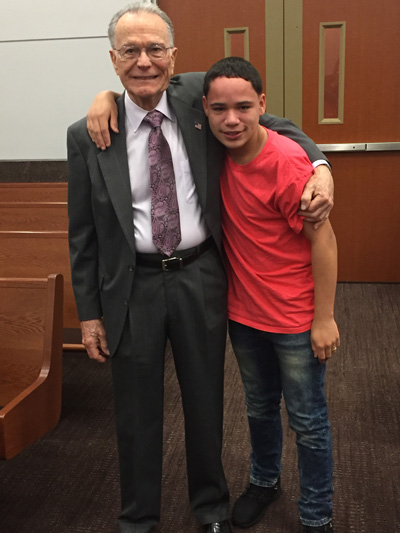 After an initial failed placement, Philip and his siblings were placed together in a loving foster home. They had seen the work of Child Advocates during their time in protective custody and requested an advocate. Soon, tenured volunteer Adrian was assigned to their case. Adrian began building relationships with each child but developed a special bond with Philip. Adrian recalled, “When I first met Philip, he was lying on the floor of his bedroom, curled up in a ball trying to hide.” Adrian could see that Philip needed someone.

When Adrian began working the case, things looked promising since their foster mother was in the process of adopting them. Unexpectedly, she was diagnosed with cancer and passed away. The children were devastated at their loss, but the situation became more complicated when the children were split up to live in different homes.

From the time Adrian was assigned until the case closed, Philip lived in 11 different placements. Whether it was a shelter, hospital, residential treatment center, or with a foster family — Philip did not stay anywhere very long. Because of the trauma he had experienced, Philip would get in fights if provoked and often ran away. Adrian spoke to Philip weekly, and would visit him once a month to check in on him. Adrian became a mentor to Philip, and Philip trusted Adrian.

“I wanted him to know that while I didn’t approve of his behavior, I still cared about him,” Adrian said, “To me, the most important thing I could do was be there, and always keep my word. If we can do just that, it means a whole lot.” Through it all, Adrian did everything he could to keep the three siblings in touch and never gave up trying to find them a home where they would thrive.

Four years into the case, Adrian located the children’s maternal uncle, Bobby. When Bobby learned what had happened to the children, he eagerly wanted to take them in. Philip was thrilled to have found someone he could call family, and he began to find hope after years of struggling. Adrian worked through the necessary channels, persistently coordinating with the caseworker to have them moved to be with their uncle.

For the first time, Philip had a family that was not going to give up on him. Philip’s behavior stabilized, and with Adrian’s help, he began working through the trauma he had experienced. In July of 2019, Adrian stood by Philip as his uncle adopted him. After five years on the case, Adrian had succeeded in finding Philip a permanent home. As they stood before the judge, Adrian remembered the little boy hiding on his floor five years prior. “He used to tell me all he wanted was a family. It was such a great feeling to see him so happy,” recalled Adrian.

Our Children Our Advocates Annual Reports
Latest Post
Honoring Our 2022 JAG Award Recipient!
Honoring our 2022 Rookie of the Year
A Whimsical Afternoon at the Westin Galleria Raising Money for Child Advocates
return to the blog
ON INSTAGRAM @CHILD ADVOCATES
REQUEST A COURT APPOINTED ADVOCATE
You may put in a request of a court appointed advocate for any child/children currently in the temporary managing conservatorship of Harris County DFPS.