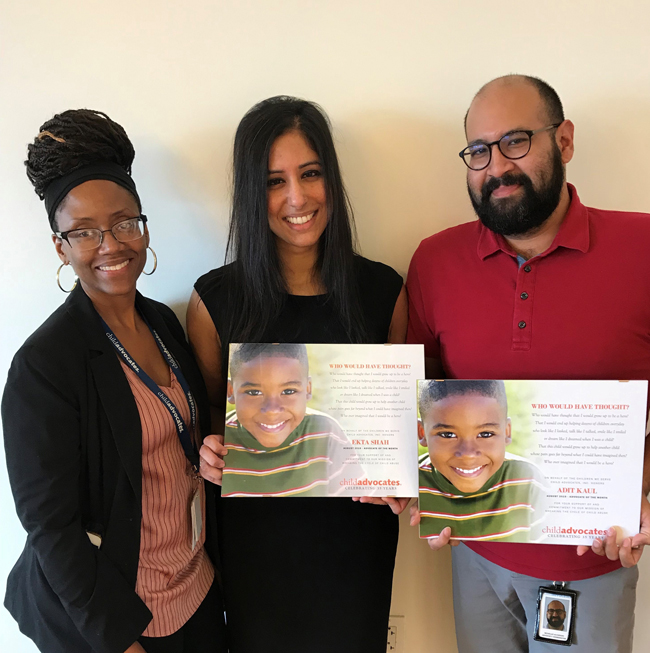 Ekta with her and Adit's advocacy coordinators. Unfortunately, Adit was not able to be there to accept his award.
(Left to Right: Kara Mitchell, Ekta Shah and Nicholas Alvarado)

Ekta Shah and her friend Adit Kaul became court appointed advocates in 2017, when they immediately started working their first case together, serving a family of five siblings.

Ekta and Adit were drawn to this case in particular because of a cultural background they shared with the family. The parents had spent most of their life in another country and had only come to America as refugees in the last few years. The children on the case initially came into care because of allegations of medical neglect. All five of them needed specific medical attention, and as a pediatric neurologist, Ekta knew she could provide a valuable perspective and a wealth of knowledge regarding the children’s best interest. Ekta and Adit began to look into the history of the family and the children, trying to find out what needs needed to be met. “I dug as I would dig as a physician”, Ekta relayed, doing everything she could to make sure she had all of the information possible.

For the past three years, Ekta and Adit have exemplified outstanding determination in using their cultural ties and medical understanding to help the children they are serving integrate into life in America in an environment where they can thrive. These two advocates have spent many hours over the years building relationships with each child and have been deeply committed to making sure that their needs are being met. They have seen the siblings develop and change in positive ways, making necessary medical and educational strides as they have proper care and consistent adults who are willing to speak up for them.

“I think of them like my own kids”, said Ekta when reflecting on her involvement with the children. She spoke in particular of her conversations with the oldest child, now a teenager, saying that she is consistently checking in on the decisions he is making, guiding him towards a healthy lifestyle as he grows into adulthood and the court figures out a more permanent home for him.

These two friends and advocates have displayed a commitment to these children for three years and counting and they don’t plan to stop anytime soon. In fact, in addition to her demanding career, Ekta has recently even taken on another case in order to serve more of Houston’s abused and neglected children.

We are so grateful that these five children and others like them have a voice thanks to advocates like Ekta and Adit! Because of their exceptional work, Ekta and Adit were named our August 2019 Volunteers of the Month. To learn how you can become a volunteer and make an impact like them, click here.