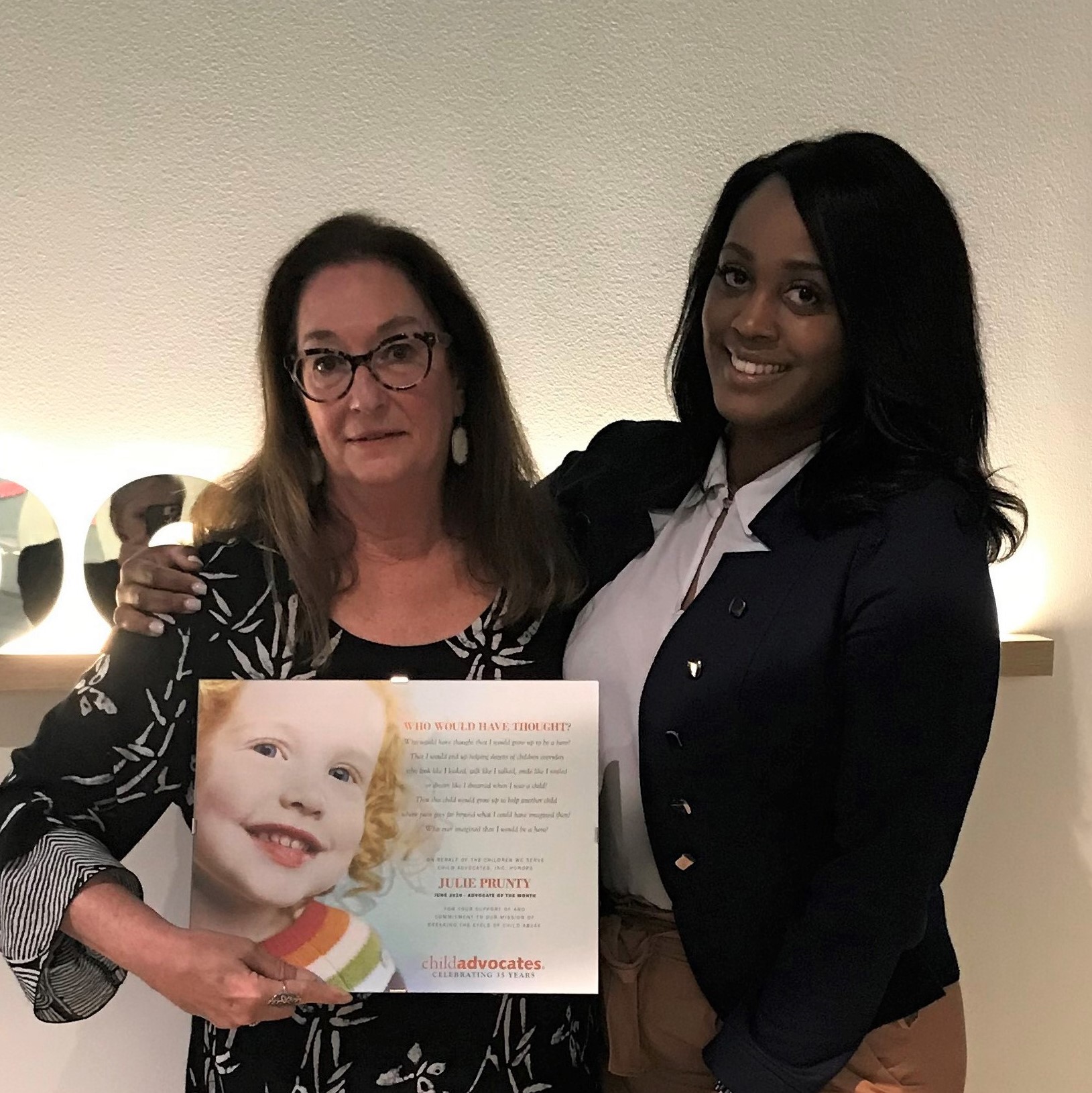 Julie Prunty has been an advocate for children in Houston since 2008. In the past eleven years, she has spent much of her time and effort seeking to do everything she can to be a light in the lives of children who need it. In the case of Jordan* and Jonathan*, Julie has invested over 650 hours.

Julie met when Jordan and Jonathan in November 2010 when they were just eleven and nine. They were taken into CPS care because their mother was struggling with a deep drug addiction. One day while their mother was being treated, their stepfather abandoned them at a hospital stating “these aren’t my kids”. The boys needed stability, and a chance to move forward, so they were placed at Boys and Girls Country, a residential home in North Houston for children in different troubled situations.

Julie became involved as an advocate on the brothers’ case shortly after their placement at Boys and Girls Country. She immediately went to work, doing everything she could to bring about what they needed. During this time, she discovered that the younger brother, Jonathan, was diabetic. His mother had known of his condition, but she did not think of his diabetes as something to bother with. Because of this neglectful care, his numbers were at very unhealthy levels. The older brother, Jordan, now 11, could not spell his last name. He had spent his life up to that point being passed over. It was also discovered that both the boys had been exposed to Hepatitis in 2009 and that went untreated. Julie knew the boys seriously needed her help. Julie was determined to get it for them.

The boys’ mother continued to struggle and miss opportunities to see her sons, but nevertheless, Jordan and Jonathan began to make health and educational progress with the new support of their advocate.

In January of 2013, Julie noticed that Jordan’s leg was bowed while we was sporting a new pair of jeans and he needed surgery to correct the bone deformity in his leg. Julie stayed with him in the hospital during his surgery and did not leave his side. Jordan saw that Julie was really going to be there for him — it was a time of bonding for them both.

For years their mother wasn’t allowed to see the boys as she was struggling to comply with what was being asked of her by the court to maintain visiting rights. Once her rights were restored, Julie took it upon herself to make sure that she would be present at the annual Boys and Girls Country Awards Banquet where the boys were receiving awards. Mom made it to the banquet, and got to see her sons be recognized for all of their hard work and achievement — this was only made possible through Julie’s dedication.

A short time later, Julie tried to get a hold of the boys’ mother and was met with only an answering machine. Eventually, she was given the news that the boys’ mother had overdosed twice and was in dire condition in the hospital, and shortly after, she passed away.

The last time Jordan and Jonathan saw their mother was at the awards banquet. This was devastating for the boys, but it spurred on Julie’s commitment to them all the more.

Jonathan, now in eighth grade, was still reading at just a third grade level when the school decided he no longer needed be in special education classes. Julie knew this wasn’t going to be a helpful move for him, and she took this matter to court. She advocated for him to stay where he would receive the help he needed, and the judge listened to her plea. With just a month left of ninth grade, he got to go back to special education classes. He also became involved in football, band and track - things he never had showed interest in before. Jordan was voted prom king. The boys were thriving in their high school years, thanks to Julie’s commitment to their well-being.

Over the past nine years, the boys’ case has remained open. It has seen seven different caseworkers and three different lawyers, but Julie has remained. “Everybody leaves,” the boys said one day, but Julie has been committed to them since day one, for eight years and counting. In Julie, the boys found more than just an advocate. They found someone that dried their tears when they lost their mother and helped to spur them forward. They found someone to look up to and someone they could trust to consistently be there for them.

When Julie’s advocacy coordinator, Allyson, was asked about Julie she spoke with tears in her eyes saying “She inspires me every day to keep doing my job.” As far as Julie is concerned, she is just doing what anyone else would do. “You could sub me out for any volunteer,” she said. Julie’s humility, passion and amazing dedication to our mission are what make her an incredibly deserving recipient of our Volunteer of the Month award.

Congratulations, Julie, and thank you for all you have done and will continue to do to make a difference in the lives of Jordan, Jonathan and children all around Houston.

*Names were changed to protect the privacy of the parties involved.
Latest Post
Honoring Our 2022 JAG Award Recipient!
Honoring our 2022 Rookie of the Year
A Whimsical Afternoon at the Westin Galleria Raising Money for Child Advocates
return to the blog
ON INSTAGRAM @CHILD ADVOCATES
REQUEST A COURT APPOINTED ADVOCATE
You may put in a request of a court appointed advocate for any child/children currently in the temporary managing conservatorship of Harris County DFPS.