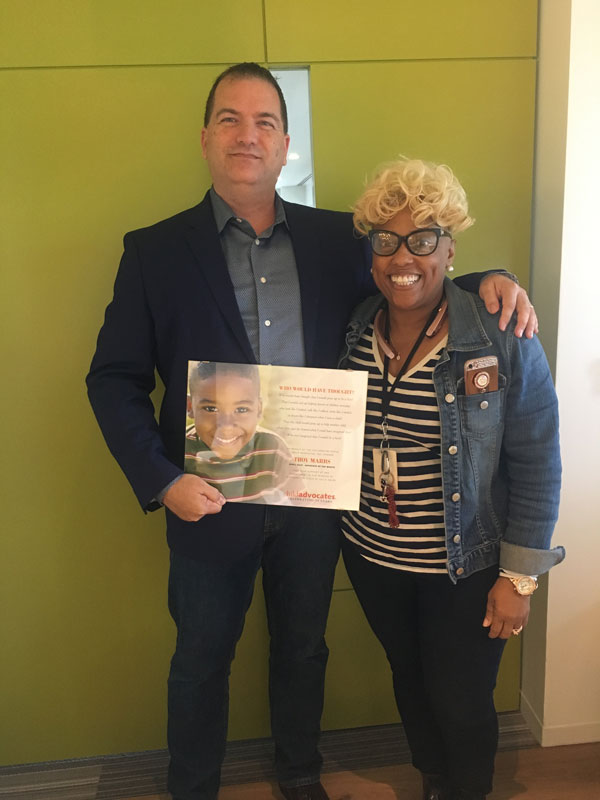 In his second case as a court appointed advocate, Troy Marrs met Sophie*, a 13 year old girl who was removed from her home after showing up to school with a busted lip. She confided in her teacher that her father hit her. Sophie was taken into the care of Child Protective Services and placed in a foster home far outside of Houston. Troy was assigned as her advocate, and committed to regularly make the long drive and advocate for Sophie's best interest. At his first visit, just three short days in this placement, Sophie's foster mother explained that she had already requested that Sophie be moved because of a verbal outburst toward one of her other children.
As Troy got to know her, Sophie confided in Troy saying, “no one cares”. Sophie's experience with adults was one of abandonment, and her behavior showed that she was struggling. Troy listened to her, and he let her know that he would be different than the authority figures she was used to, and that she could count on him. He explained that he wasn’t being paid to spend time with her and that he really cared. Sophie perked up after he told her this. For the first time, she felt like she had a consistent adult in her life that she could trust.
Troy was true to his word, making long drives to the Austin area to visit with Sophie in the residential treatment facility where she was placed. With every visit and interaction, Troy did his best to try to get a smile out of Sophie. He listened to her and asked her questions that would help him understand how she really felt and what she was really like, outside of what any paperwork could tell him. Sophie expressed a desire for consistency and familiarity. Troy evaluated everything, and because Sophie's father had successfully completed all the work asked of him by the court, Troy recommended that she be placed back with her father. Sophie and her father began counseling together, working towards building a healthy relationship and future, while Troy continues to monitor her placement and visit her twice a month to ensure that she is thriving.
Troy was able to show Sophie that she was more than just another child in the system, and get to know her beyond what any paperwork could show. Because of his exceptional work, Troy was named our April 2019 Advocate of the Month! To learn how you can become a volunteer and make an impact like Troy has with Lucy, click here.
*Name was changed to protect the privacy of the parties involved.
Our Children Our Advocates
Latest Post
Honoring Our 2022 JAG Award Recipient!
Honoring our 2022 Rookie of the Year
A Whimsical Afternoon at the Westin Galleria Raising Money for Child Advocates
return to the blog
ON INSTAGRAM @CHILD ADVOCATES
REQUEST A COURT APPOINTED ADVOCATE
You may put in a request of a court appointed advocate for any child/children currently in the temporary managing conservatorship of Harris County DFPS.